Yesterday, I left my job. 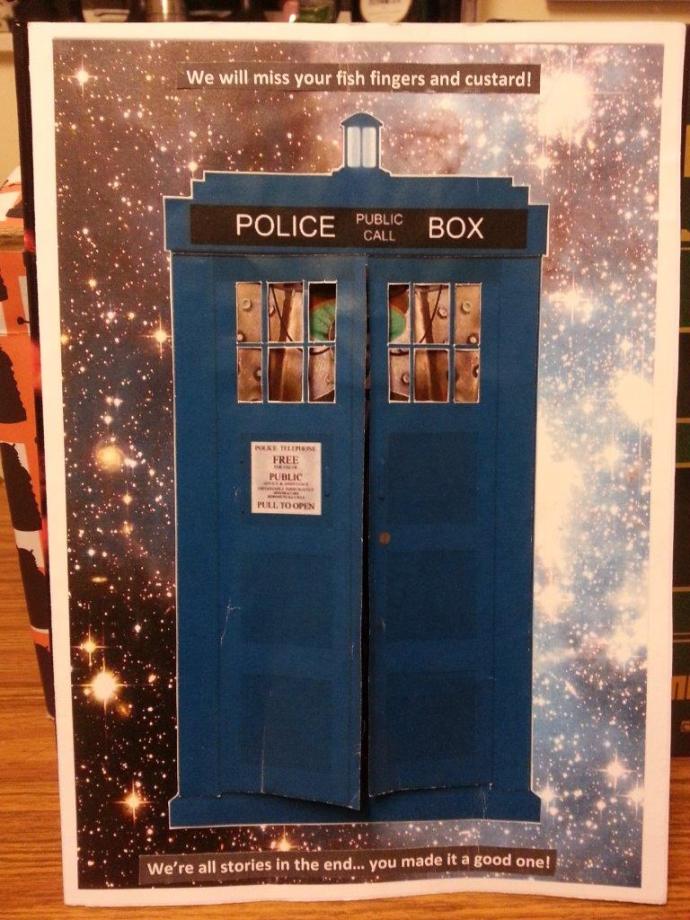 I don’t want to go into all the details. Suffice to say that after twelve years, it was a wrench. But it’s time to move on. Like many I’ve been sucked into the complacency that comes with the familiar. It was a localised, unadventurous position which presented its share of challenges but which I could leave behind me at half past four. It was in its own way quietly fulfilling, and I’ve had a great time, but sometimes you need to pull off the band aid with a flourish. Getting out now was the right call, but the longer you’ve been in something the further you have to climb to get back to the surface.

Perhaps my inherent fear of change is one reason why I love Doctor Who so much. It’s a programme that has, after all, survived half a century by changing as often as it needs to, without fear of the consequences, and while there are certain conventions and rules and continuities, it’s fair to say that the show’s ability to adapt is what gives it its staying power and enduring appeal among a very diverse audience. Its willingness to take risks and embrace change as inevitable, whilst nonetheless maintaining a particular course (albeit one that has led it into some occasionally turbulent waters) have enabled it to survive far beyond the reach of many of its peers. More than this, the show at its best is the epitome of creative thinking and problem solving. Those effects teams had their backs against the wall and were shaking a virtually empty piggy bank, but they got round this by innovating and making the most of what they had – something I’ve always tried to encourage my team to do, particularly in the face of adversity.

People in the office know about my obsession with the folk of Gallifrey. I’ll drop references into any conversation where it suits the mood. The default notification tone on my S3 is a groaning TARDIS, which emits its wheezy rumbling every so often round the room when I’ve forgotten to put the thing on silent, much to everyone’s amusement. I’ll email video links and photos and dash down to the post room and back whenever I receive a DVD or book or figure selection in the mail, eagerly ripping off Amazon packaging and discarding manila envelopes with the enthusiasm of a six-year-old on Christmas morning.

So what do you do when your Who-fixated manager leaves and you want to mark the occasion? Well, you start with this. 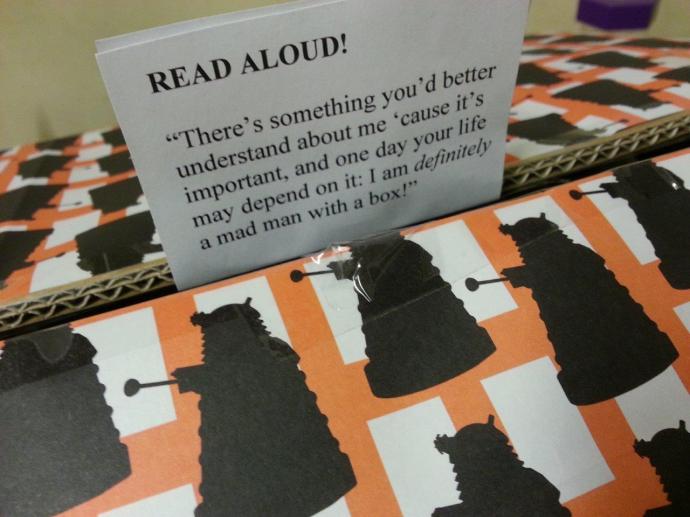 Then you hold a gathering. And there is cake. Oh, so much cake. 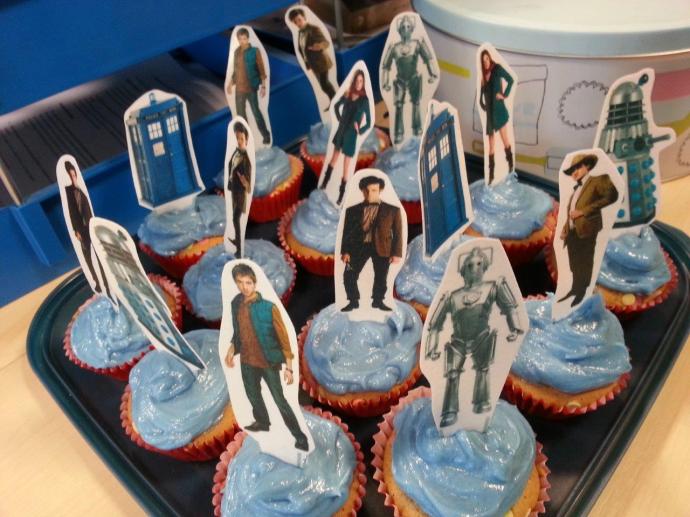 If you know that your manager’s wife is expecting a fourth child, you do a little shopping on Ebay. And someone else in the team has a session with transfers and babygros. 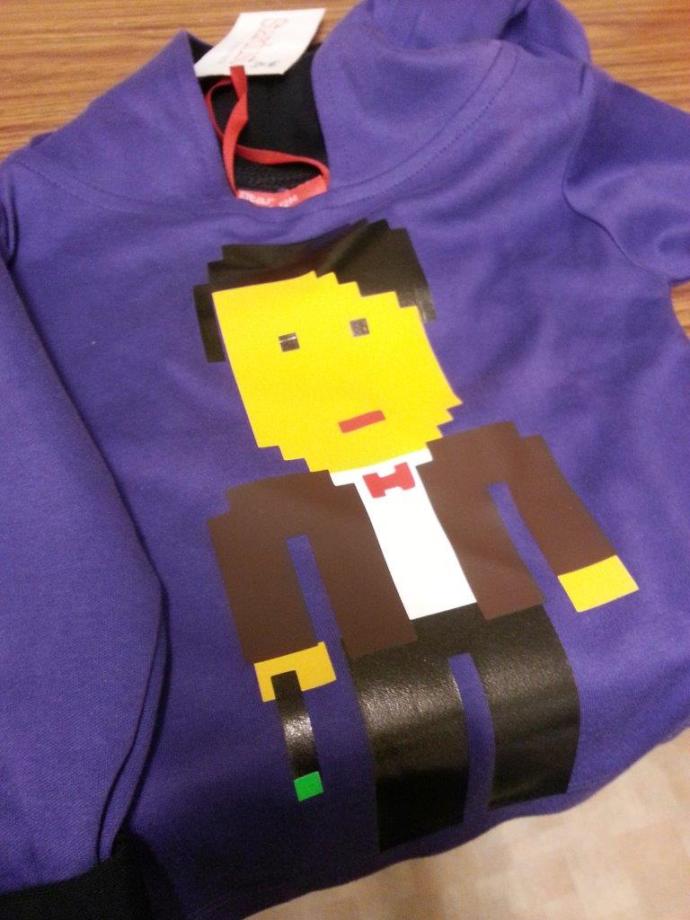 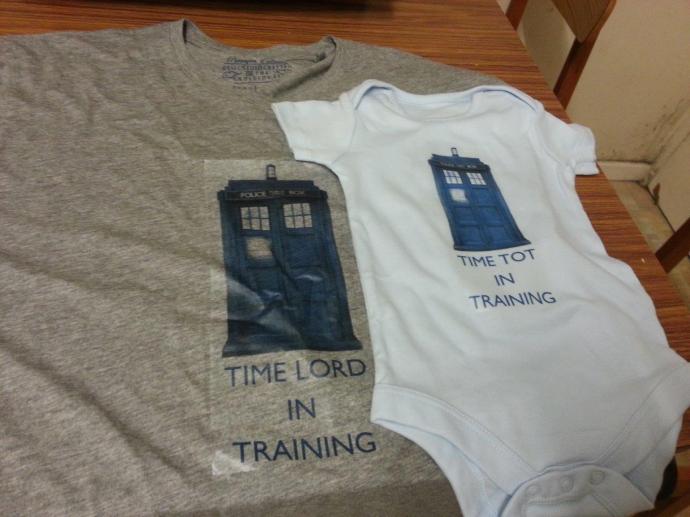 Hidden amongst the flowers and chocolates and wine and Lego (yes, really), there were other treasures, like this. 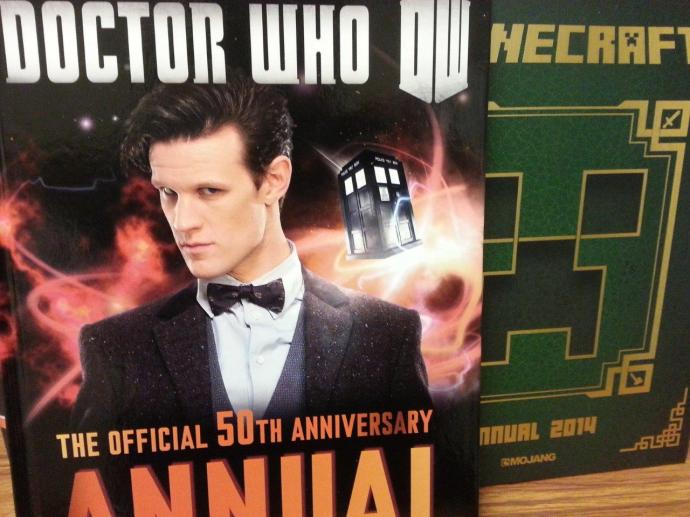 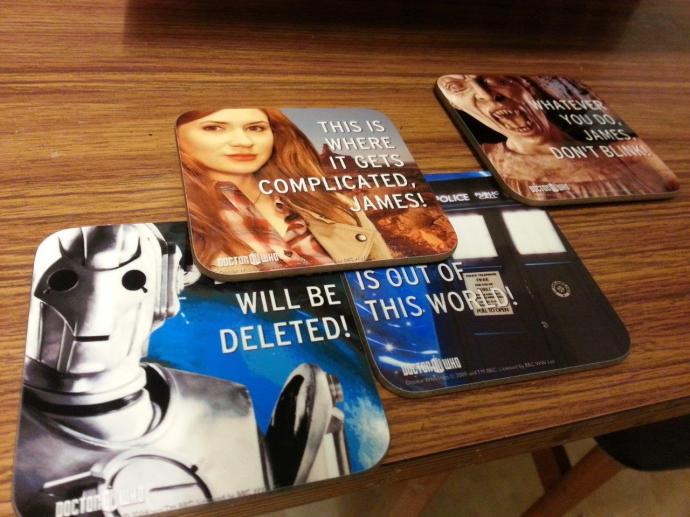 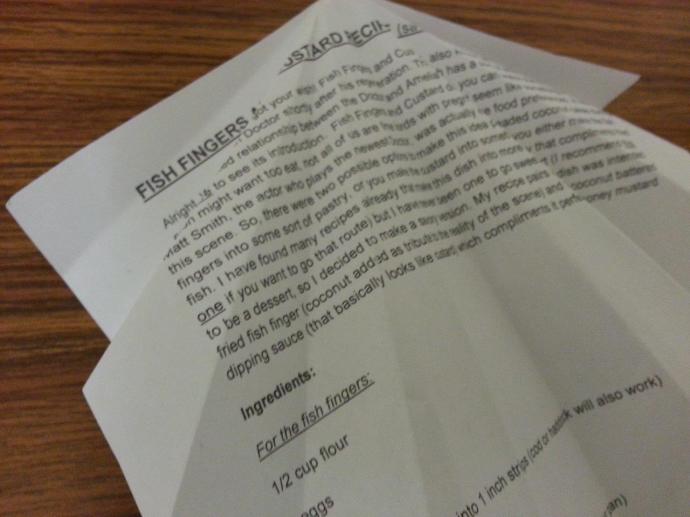 Oh, and one of the team got busy with her knitting needles. And I’ve had to hang this on the door so you can see how long it was. 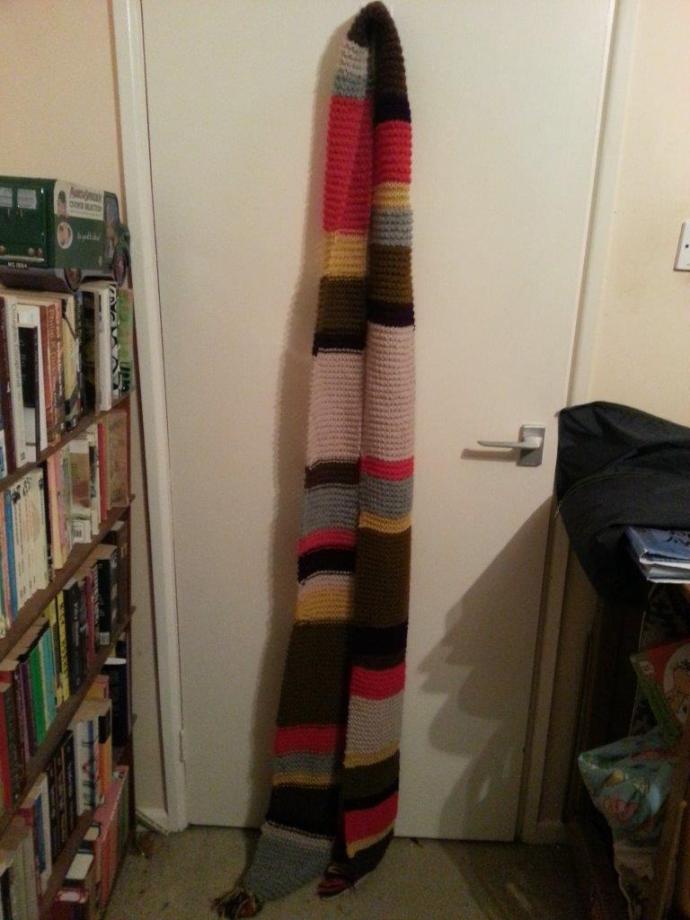 And then you do a farewell speech which reduces said manager to tears, laden with quotes, and which is reproduced below, not out of vanity, but because I think it says more about the people I work with than it does about me.

“The universe is big. It’s vast and complicated and ridiculous. And sometimes, very rarely, impossible things just happen and we call them ‘James’.

Seriously: it is going to be tough to see your desk empty. I think I speak for everyone here when I say we will sincerely miss your kindness and generosity, your contagious sense of humour, your positive attitude, your nodding Jesus, the crazy TARDIS eye-trickery thing buried under all your paperwork and journals, and your brilliantly funny and never tumble-weedy jokes that you always manage to crack at the most appropriate moments. [Ed’s note: I don’t think she was being totally serious here.]

There’s a lot of things you need to get across this universe. Warp drive…wormhole refractors…you know the thing you need most of all? You need a hand to hold. You made me feel like a part of the family when I first started here. And I know that everyone who has worked with you over the years would say you have made them feel a part of that extended family and regularly brought a smile to their faces.

This is one corner of one country, in one continent, on one planet that’s a corner of a galaxy that’s a corner of a universe that is forever growing and shrinking and creating and destroying and never remaining the same for a single millisecond. And there is so much, so much to see. It just won’t be the same office without you. But we bid you farewell and sincerely hope you find happiness in all your future adventures. Do what the Eleventh Doctor does: hold tight and pretend it’s a plan. And if that doesn’t work, you can always console yourself with some fish fingers and custard.

A final piece of advice which may or many not be helpful to you, but I like it because it comes from my favourite Doctor. Always take a banana to a party, James. Bananas are good!”

I’ll miss that place. I really will. But if nothing else, I’ve got twelve years of re-runs.