Notes from the sofa

Second child and I are blazing our way through series three. Josh and I have already done it, of course, but it’s a different experience watching with Thomas. When he’s engaged, he won’t take his eyes from the screen. When he’s bored, I keep having to pull him back. It’s not his fault. It’s difficult for him to concentrate for long periods, and that goes with the territory. Too much dialogue and he loses interest. We have had to abandon several episodes because they simply didn’t work for him (which was a shame; I always did enjoy ‘The Impossible Planet’).

But he’s also surprised me. ‘The Girl in The Fireplace’, with all its ontological trickery and quiet, understated romance, had him glued to the screen. Conversely he didn’t want to know about ‘Gridlock’, which features flying cars, humanoid cats and an enormous crab. The other week we were watching ’42’, and he became visibly agitated during the finale, in which the Doctor is infected with a parasite that renders him makes him overact, Francine Jones deals with her daughter’s Electra complex, and Martha herself doesn’t quite fall into the sun (while a random actress from Eastenders does). Thomas sat there as the clock ticked down, his face hidden behind his hands, crying out “I can’t watch!”. (Neither can I, kid, but for entirely different reasons.)

Over the weekend, we went through the ‘Human Nature’ / ‘Family of Blood’ two-parter. It’s still one of my favourite post-2005 stories, if only because Tennant gets to act out of character and I don’t want to whack him over the head (because the last time we saw him really doing it was in ‘New Earth’ where he pretends to be Zoe Wanamaker, and that’s just an embarrassment). His chemistry with Jessica Hynes is lovely, the Edwardian locale is elegantly realised, and Harry Lloyd (Baines) is a revelation. Oh, and it has Thomas Sangster, who is wonderful, even if the war scenes don’t convince.

So it’s tremendous, but Thomas was struggling. The whole concept of John Smith being a person in his own right was confusing him. He enjoyed the scarecrows, but in the scenes where Smith debates the ethics of surrendering his life so that his counterpart may be restored, Thomas declared “The Doctor’s going to die!”.

I led him into the kitchen, and filled two plastic cups. 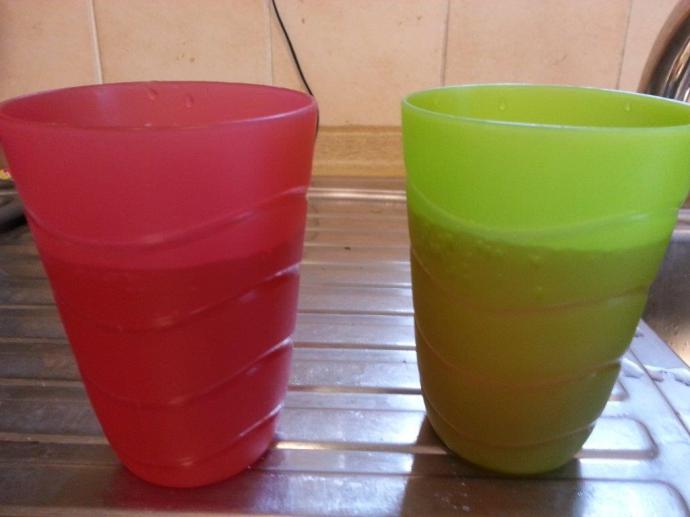 “This one,” I said, pointing to exhibit A, “is the Doctor. And the cup is the watch he’s hiding inside. OK?”
“OK.”
“Meanwhile, this one is John Smith, inside the Doctor. So this cup is the Doctor’s body. Now, can I pour the Doctor back into this cup?”
“No.”
“Precisely. It’s already full. If the Doctor is going to go back from the watch inside his body, the only way to do it – ” and I demonstrated, feeling inexplicably doleful about the whole thing – “is to pour John Smith down the drain.”

That seemed to satisfy him, and he was breathtakingly silent during Baines’s chilling voiceover explaining how the Doctor granted the Family their own twisted versions of immortality. I recalled a conversation we had a few months previously, where I’d taken him out of my nephew’s dedication service and we’d wandered around the churchyard for a while, looking at the graves and explaining about where things go. Children with autism often struggle with abstractions – that’s why we use visual timetables and why, when I’m offering him a sandwich, I’ll get jars out of the cupboard so he can see what he’s looking at – and I suppose the concept of a soul was going to be even trickier to grasp for someone whose comfort zone is the tangible. My fear is that he’ll now go to funerals believing that when people die all their inner orange squash leaks out, but I guess I can live with a different sort of theology.

This evening’s episode is ‘Blink’. At least that one isn’t complicated, right?

2 thoughts on “Notes from the sofa”