Call off the search (the Brian of Morbius edition)

In the first instance, I’m going to copy-and-paste the paragraphs below from a similar post (with quite different specifics) over on one of my other blogs. So apologies in advance if what you’re about to read is familiar, but I couldn’t think of a better introduction. Scroll down to the search terms if you want. Go on. I don’t mind.

The other week, SJ and I were having a conversation about post popularity – not a period of time that chronologically follows popularity, but popularity of blog posts. “I wonder,” she said (I’m paraphrasing), “just how many of my so-called followers actually read what I’m writing. I’ll bet a fair number of them are spam”.

I have the same thoughts – you wonder how many of the people who blindly click the ‘follow’ button are actually digesting your missives and thoughts. I know a good number of you do, and for that I am grateful. To the rest, well, you’re excused. Lip service is part of the WordPress way, it seems, and I’d be lying if I said I had never followed blogs that I don’t read properly.

Among the regular readers, of course, there are the people who drop in because they’re looking for something. Sometimes some of my posts can provide answers – other times, judging by some of the search terms, they’ve just happened to tap in a number of words that the Googlebots determine exist in random places on different parts of my home page. So the words ‘vaseline’, ‘pornography’ and ‘live goats’ are in completely different and entirely unconnected posts, honest guv. And the money was just resting in my account.

Every so often, I’ll scan through the site stats and make a list of some of the more interesting search terms that people have been using on their wayward journey through cyberspace – a journey that led them here, however long their rest stop. Here’s a selection from the last quarter, presented as is, including typographical errors.

I’m not sure what to make of the Ghostbusters query. Nor indeed can I fathom out that first term. Did I say anything particularly profound / stupid about lesbianism that would warrant someone to look me up, either to gasp in awe or in horror? And speaking of stupid, who the hell came up with that last one? Scooby Doo is a great show. It’s a little formulaic, but that’s why it’s lasted for this long and in spite of Scrappy Doo. I would blog about this further but I’m still trying to work out whether Kiefer Sutherland would make a convincing Morbius (and I’m assuming that the Morbius in question was the Marvel vampire, as opposed to the renegade Time Lord).

But. But! That’s only the half of it. Because I’ve discovered that a bunch of search engine terms take the form of questions. (Actually, the fourth entry in that list above is technically a question, but it’s also a direct quote, and I presume it was searched with that in mind.) And I’m figuring that if you don’t try and address what your would-be readers want to know, aren’t you missing out on something? I have therefore picked up on a few of the more interesting questions I’ve had this last quarter and reprinted them below – again, verbatim – with my answers.

Indeed you can. This is one of those ‘puzzles’ the chief writer set us throughout series five, and when it happened in ‘Flesh and Stone’ I was willing to let it go, as the concept was relatively fresh. This has been covered in more blogs than I could count, so it seems somewhat redundant to include it here, but basically the Doctor’s got his jacket back because it’s not the same Doctor. It’s the Doctor from a few weeks later, travelling backwards along his own timeline just before he’s obliterated from existence. (Yes, I know it sounds silly. It really was.)

Bright. BRIGHT EYES. I know Art Garfunkel’s diction was waning even in the 1970s, but sheesh.

I know it’s scrappily done, but it almost works. Almost.

No one understands Numberjacks. They just think they do. On the surface it’s an accessible children’s show about elementary mathematics problems that are solved by anthropomorphic numbers who live in a sofa. But beneath this CG-driven exterior there’s a sinister Groundhog Day-like undertone to the whole thing, as epitomised by the fact that the room they leave is constantly empty, the Numberjacks have to display the profile of every villain they face every time, and the fact that the cat is always sitting on the sofa. There’s also the white elephant that is the buddy block, the fact that the characters are apparently able to hack local CCTV (and also have cameras in places that really shouldn’t have cameras) but can’t tell the difference between a circle and an oval – oh, and the enigma of the dancing cow.

So no, nobody’s figured it out, and anyone who tells you they have is either hopelessly naïve, or just lying. (We’ve tried, though. Gareth recently asked me whether I thought Number Four was ever sad that no one was able to give him a high five, as well as observing that pink was an unfortunate choice of colour for Number Three.)

Oh, look, it’s quite simple. Katie Nanna is perpetually grumpy, correct? Her sternness and strictness were qualities that the Banks evidently looked for in their incoming nannies, requiring as they did someone to keep the children in line. But George Banks blamed her health – in particular the itching, swelling and fatigue that are early signs of liver damage – and posited that this was what was making her cross, not a natural disposition towards effective discipline. 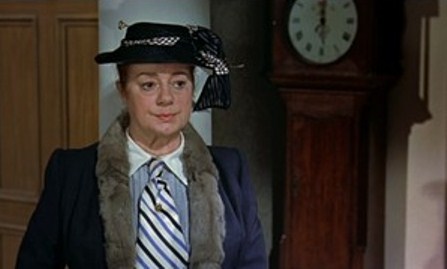 Katie Nanna. Fond of the gin, that one. 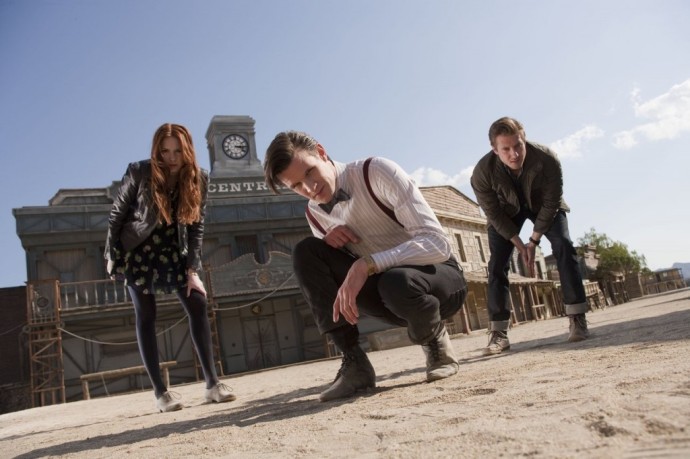 ‘A Town Called Mercy’. A low point, at least until ‘Journey to the Centre of the TARDIS’.

– if a weeping angel sees the silence will it forget?

Ah, the old Angels vs. Silence question, a match-up rivalled in sheer tedium only by the prospect of the Daleks vs. the Cybermen. Anyway, Joshua asked me this a while back, so I’ve had time to think it over. If an Angel is able to move towards the Silent, unobserved, then it’ll be able to attack as it normally would. The moment the Silent turns to see it, the Angel freezes like it normally would. But I’m not convinced that the Silence’s weapon of choice (that stupid Force Lightning) would have any effect on granite, so the best thing to do would be to just bow out gracefully. Observe this hastily-sketched diagram.

Presumably the Silent would need to manoeuvre itself round the back of the Angel so that it could no longer be observed, keeping an eye on it at all times (and seeing as the Silence do not appear to blink, it would have a distinct tactical advantage in this department). When it leaves the room, the Angel unfreezes, but presumably forgets why it came in there in the first place, which is something that I gather happens a lot when you’re extremely old and prone to seizing up at the most inopportune moments.