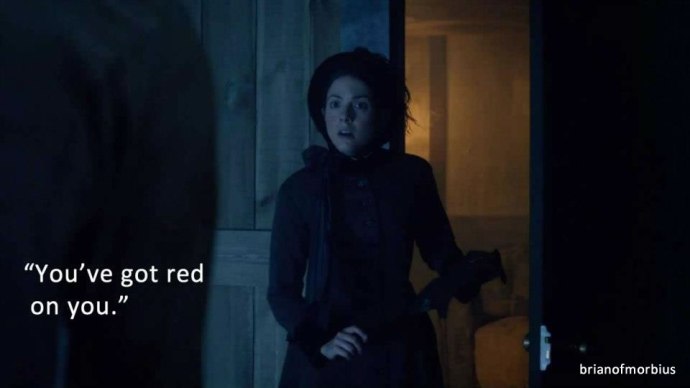 Last Monday, I was having lunch in Oxford with some academics. One of them was a part-time writer, and when the subject eventually turned to Doctor Who, he mentioned that he’d spent a few months in correspondence with Steven Moffat trying to persuade him to give him a commission, ultimately unsuccessfully.

“My problem,” I said, “is that there seems to be a bit of an old boys’ network there at the Beeb. It’s the only explanation why certain writers – and I won’t mention names – seem to get repeated commissions when they’re systematically incapable of producing anything that’s even remotely passable.”

He nodded. “Yes, I know what you mean. Although,” he went on, sipping his Merlot, “I couldn’t actually name any of Gatiss’s episodes.”
“How on earth did you know I was talking about Gatiss?”
“It was fairly obvious, really, wasn’t it?”

If you were here last week, you’ll have seen me lambasting ‘Journey to the Centre of the TARDIS’, an episode so bad it was the closest I’ve come to writing to Points of View asking why my money was being used to fund this shit. The story’s mediocrity shouldn’t have come as a surprise given that it was penned by the man who brought us ‘The Curse of the Black Spot’, which – as Gareth pointed out – has Amy Pond dressed as a soaking wet pirate and still manages to be dull. ‘TARDIS’ was full of massive plot holes, principals behaving completely out of character and a general air of stupidity about it, as if it were a story that had been written at three in the morning after several bottles of Gordon’s and half a pound of Red Leicester.

When I saw the writing credits for last night’s episode, my heart sank – but as it turns out, I worried prematurely. Because while ‘The Crimson Horror’ did indeed come to us from the hand of Mark Gatiss, and while it is guilty of the same sins I heaped upon its forerunner, there was something fun about its execution. Something – it may have been nostalgia, it may have been a growing sense of apathy about the series in general, it may have just been the mood I was in – pushed it over the edge into ‘So bad it’s good’ territory. That’s a dangerous place for Doctor Who to be, but on this occasion, it just about worked.

Telling a comparatively Doctor-lite story wouldn’t have worked if it hadn’t been for Strax, Vastra and Jenny. Still based in 19th century London, the lizard woman from the dawn of time (which was funny, if chronologically inaccurate) and her cockney life partner head for the grim lands of The North, with a lactating Sontaran who serves as comic relief coming along for the ride. I’ve given up caring about Strax’s role being little more than ‘the short, funny one’, because Dan Starkey plays him to perfection, and this week – albeit briefly – we actually get to see him back out of his dinner suit blasting away with a laser rifle in what is arguably the episode’s most satisfying moment. It doesn’t explain, of course, why Madame Vastra feels the need to wear a veil in public when Strax doesn’t. 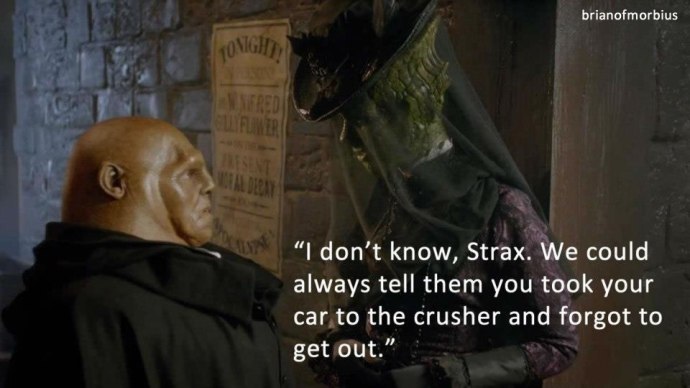 Seriously, this was lame.

There’s trouble at t’mill, see: there’s been a spate of mysterious disappearances, and freakish red corpses have been turning up in the river. Both are linked to a factory run by the creepy-looking Mrs Gillyflower, and it’s up to Vastra, Strax and Jenny to find out what’s going on. This leads to Jenny sneaking round the complex unobserved: she does this by asking a young girl to swoon right next to a locked door she wants to break open, leading a crowd of onlookers to wander up while she picks the lock right next to them, completely unobserved. As you do.

It’s at this point that the Doctor shows up. Of course, his role in proceedings at this point is to stare wildly and do a passable impression of a zombie / Frankenstein’s monster hybrid. If Benedict Cumberbatch – who recently played opposite Johnny Lee Miller in Frankenstein – had at this point been cast as the Doctor, this would have been funny. As it stands, it’s basically an excuse for Matt Smith to show off the depth of his range, presumably workshopped in a ‘hilarious’ featurette that they’ll put on the DVD. 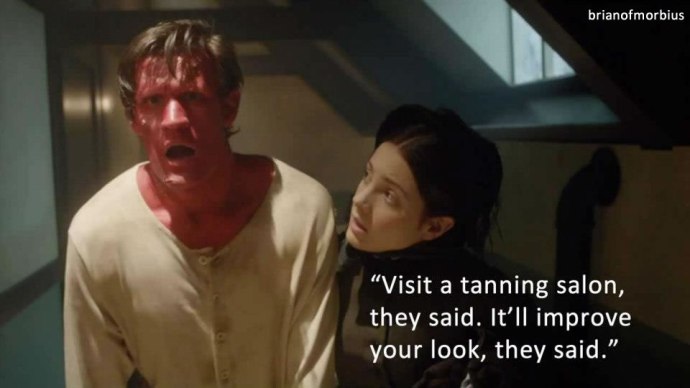 Mrs Gillyflower’s plan is to detonate a rocket filled with the toxic red venom over the Earth’s atmosphere, thereby wiping out its population except for her Chosen Race of Selected Few, stored safely in giant upturned sweet jars. She’s ultimately stopped by her daughter, who has borne the brunt of Mrs Gillyflower’s experiments, which would explain the milky eyes, blotched complexion and questionable acting.

The concept of a supervillain trying to eradicate humanity so they can build an Aryan-type civilisation is nothing new, of course. Still, the resemblances to Moonraker were uncanny, right down to the final betrayal of the antagonist, instigated by a physically flawed character who realises they have no place in the New World Order. Of course, Ada doesn’t actually look anything like Richard Kiel, so that honour is left to Michelle Tate.

The villain’s gender subversion was an interesting idea, but I don’t know why you’d cast someone like Diana Rigg in this role without doing something, at least, to explain why she was behaving the way she was – some sort of backstory, whether explained in exposition or told in flashback, would have been welcome. When the forty-five minutes were up, she was lying dead at the bottom of the launch bay and we still knew next to nothing about why she’d done the things she did. Perhaps the parasite infected her mind, the way Doctor Octopus’s arms corrupt him once they become permanently fused to his back, but it would have been nice to have been told (unless we were, of course, and I missed it because of the dodgy sound mixing). As it was, there was little for Ms Rigg to actually do except look menacing and sing snatches of ‘Jerusalem’, whilst being shot mostly from below so that she gave the appearance of always looking down at you.

This is not one of those shots. But I like her hair in this one.

Speaking of looking down, it turns out that this is what we’re supposed to have been doing all along, when it turns out that the mysterious Mr Sweet was not the Great Intelligence, as I’d initially suspected. The obvious ‘clue’ came when she appeared to drop salt down her blouse, but it wasn’t until she later unbottoned it (dear God, I thought all my Christmasses had come at once) that we discovered what was actually going on. Mind you, I’m sure I’m not the only one who spent the bulk of the episode – with its sticky red emulsion and British industrialisation imagery – hoping that Mr Sweet would actually turn out to be this chap. 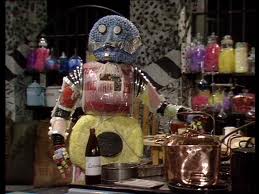 (I think it’s saying something when you find yourself longing for ‘The Happiness Patrol’. Don’t you?)

Of course, if we trace the lineage, the treacherous Mr Sweet eventually brings us here: 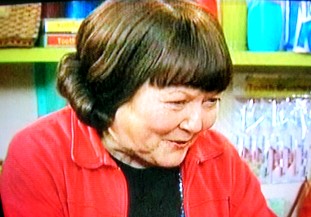 Suzie Sweet, from Balamory. Who, by the way, lives here:

In the red house. Hmm.

It all ends in a bit of a hurry. Mrs Gillyflower manages to launch the rocket but it doesn’t have the venom on board, so that’s all right. Then there’s a slightly awkward hostage situation which is resolved with the help of Strax, and then the Antagonist of the Week takes a tumble over a staircase. This leads to our clearest sight yet of the parasite that’s been attached to her bosom for God knows how long, just before it is mercilessly crushed to death by Ada. 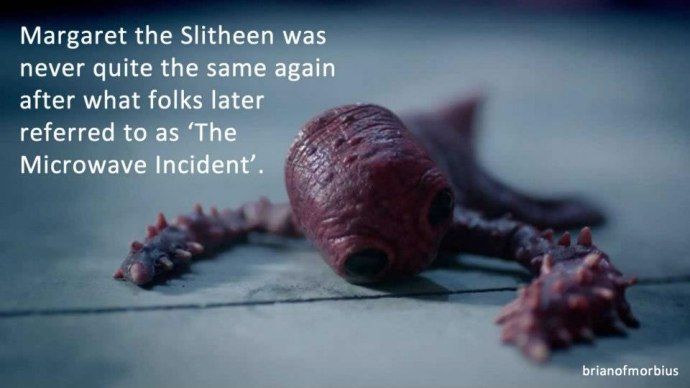 Everything about this one was a mess. The Doctor-lite mystery aspect was an interesting idea but structurally off-key. Strax’s encounter with the direction-spouting Thomas Thomas (you see what they did there?), while amusing, was hopelessly out of place, as if Gatiss had made a bet with Reece Shearsmith that he could get a joke about sat nav into a Victorian episode. The final act was all over the shop, Rigg was underdeveloped, and there was absolutely nothing for Clara to do (yes, I know I complain about the whole Woman Twice Dead thing, but there must be a middle ground somewhere).

But there was something very old school about it all. Even the title evokes memories of Classic Who, while Mrs Gillyflower is a decent example of an established antagonist-beneath – the apparent villain who expires at the end of episode three just in time for the real monster to be exposed. Of course, this doesn’t happen, and the parasitic themes of the last fifteen minutes or so are to the story’s detriment, but whatever Gatiss lacks in storytelling ability he makes up for with sheer audacity – there’s dialogue and set pieces so outrageous that he gets away with it purely on the grounds of outlandish cheek. Bringing the series up to date, the visual approach works reasonably well, with Stephan Pehrsson favouring tight, almost claustrophobic views of the complex interior peppered with occasional wide shots – Jenny’s entrance into the ‘factory’, for example, is particularly striking, as is the grainy montage that serves as a flashback for the arrival of the Doctor and Clara. It starts out like old video footage and then morphs into flickering 1980s BBC drama material, with a subtlety I thought was long gone. 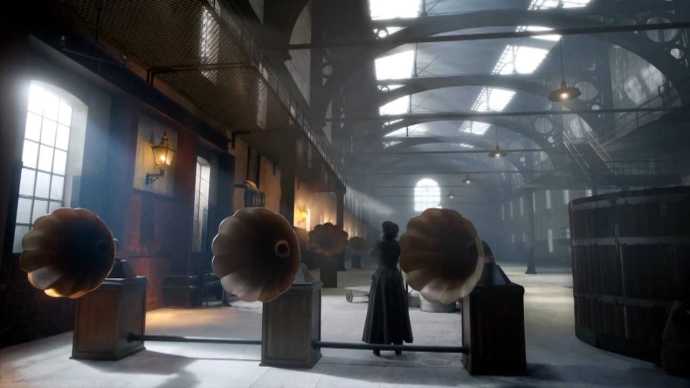 When Neela Debnath opens her review with a sentence that contains both “Mark Gatiss” and “another great adventure” you have to question whether you’re watching the same show that she is, but for everything that was god-awful about this week’s episode, Emily and I found ourselves laughing at it. I think it’s saying something about just how far from the tree that apple has fallen when the best you can hope for from Doctor Who is ‘laughably bad’, but it might be the best we can hope for, at least until this arc is finished. It’s a shame Gatiss didn’t think to iron out the structural kinks and develop his characters a bit more, but I wonder whether that would have made ‘The Crimson Horror’ tedious, rather than so-bad-it’s-good. As it stands, I was happy to have a camp, reasonably awful episode with a fun streak running right down the middle, sandwiched between all sorts of awkward questions like exactly why they needed so many test subjects, what Thomas Thomas was doing out so late, and the length of Vastra’s tongue and whether that’s why Jenny has stayed with her so long. And seriously, who the hell was taking photos on that submarine?

12 thoughts on “Review: ‘The Crimson Horror’”