Review: ‘The Rings of Akhaten’

In 1995, Bruce Willis – then undergoing something of a career renaissance – starred alongside Milla Jovovich in The Fifth Element. It’s a film I’ve always hated. It looks utterly beautiful, but I have no idea what’s going on most of the time, chiefly because Jovovich’s role is mostly to witter on incoherently. Then Gary Oldman turns up sporting an American accent to rival David Bowie’s turn in Twin Peaks. Oh, and then there’s Chris Tucker, about whom I could say a great many unflattering things.

But there’s one scene that always holds my attention, and it’s this one.

Why am I showing you this? Well, if you’ve seen it you’ll probably have guessed, but ‘The Rings of Akhaten’ was – to all intents and purposes – this scene, padded out to three quarters of an hour. Oh, there was a bit more to it than that. There were references to at least two sci-fi classics, a bit of backstory for Clara, and an ending so predictable even my five-year-old could have seen it coming. And I confess this openly and without malice: I thoroughly enjoyed it.

For sure, the opening was a bit creepy. The extended flashback where we got to see Clara’s parents meet and fall in love and then have children is quite sweet until you remember that the Doctor is casually observing it all, like some sort of extraterrestrial peeping tom. It ends with a teenage Clara standing at her mother’s graveside, seemingly unaware that she’s being watched from behind a tree. 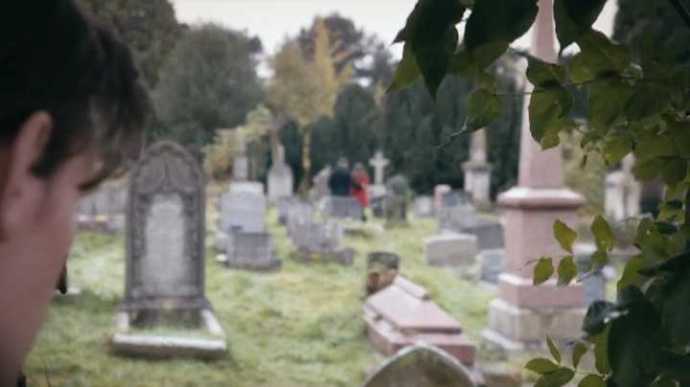 And you know, you get the feeling the chief writer made sure this bit went in. You know. As a reminder.

After this, the Doctor dances. Almost literally. There’s a weird mating ritual going on round the TARDIS console. The two of them won’t keep still; it’s practically musical theatre. You keep expecting one of them to belt out a bit of Sondheim, or perhaps this:

Yes, I know, it’s a stretch (and the quality isn’t great), but any excuse to get this song in somewhere.

“Consider yourself / Well in…”

The story kicks off properly when they reach the Rings of Akhaten, which takes the form of a Cairo bazaar populated by at least half the residents of the Star Wars cantina. It’s a derivative (intentionally so, from what I’ve read) but impressive sequence that must have eaten up most of the budget, which would presumably explain why the rest of the episode takes place mostly in a dimly-lit stone chamber and a CG amphitheatre. (Last year, we visited a Doctor Who museum in Bromyard whose big pull was that the private collector who owned most of the exhibits had spent a small fortune amassing every alien you saw for the bar sequence in ‘The End of Time’. Presumably he was checking his available balance as soon as the closing credits for tonight’s episode started to roll.) 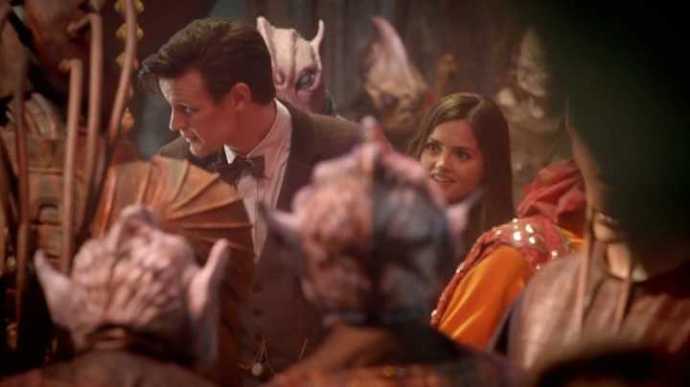 This was, I will admit, rather good.

The Doctor produces exotic fruit that looks like mood lighting, and then vanishes, leaving Clara to console a frightened princess, hiding from her guards for fear she’ll make a mistake in the big end of term concert. Clara is able to empathise, thankfully not by telling her about the time she blew an ‘A’ instead of a ‘G’ when the recorder group were performing ‘Go And Tell Aunt Nancy’ to the year threes, but about the time she got lost on Blackpool beach. (I once heard a story about Blackpool beach, about two lions who escaped from the local zoo and took a wander along the beach, whereupon one exclaimed to the other “Not many people about for a bank holiday”. I mention it here because it is quite frankly more interesting than Clara’s.)

Princess Merry (which, I’m sorry, sounds like something out of Enid Blyton, and not in a good way) is being pursued by the Vigil, who “look a bit like the Empty Child” – those quotes belong to Thomas, who was watching with us. The Vigil are another example of the classic Who opening act; we assume they’re the villain of the week but their prime role is to have a wand duel with Matt Smith in a scene that’s so Harry Potter it’s frankly embarrassing.

I’m getting ahead of myself here. First we have Merry singing, just before she’s spirited away to a grisly fate, which leads to the Doctor and Clara borrowing the rocket cycle from Flash Gordon.

The Vigil are guarding Grandfather, a sleeping god trapped in a glass box. His chamber is guarded by an impassable polystyrene door which the Doctor is able to penetrate solely with technobabble, before holding it open in this week’s Comedy Gold moment. The door rises and descends with such unerring swiftness it practically slides out of its groove. It’s so wobbly it’s like we’re back in The Hand of Fear. Let’s skip over that, shall we?

In a sudden twist, the god-in-a-box is revealed to be an alarm clock, which would explain why he’s so ticked off (you see what I did there). It turns out the mythical god in question is in fact the entire sun, albeit a sun that resembles a carved-out pumpkin.

The sun / god thing demands a sacrifice: it wants  the soul of the Queen of Years. Except the Doctor isn’t playing ball, and is determined instead to take on the god himself. This leads to a beautifully lit but frankly embarrassing monologue from the Doctor, who talks about all the things he’s seen and done – food enough for any hungry god. It’s the sort of omnipotent weary traveller bluster I thought we’d seen the last of when the Ponds gallivanted off to Manhattan, but it would seem the Lonely God thing can still get hauled out of the archives when you need something to fill up that climactic minute. I was quite enjoying it at first, but when Smith started quoting Blade Runner, bellowing “I’ve seen things you wouldn’t believe!”, I wanted to break his fingers. 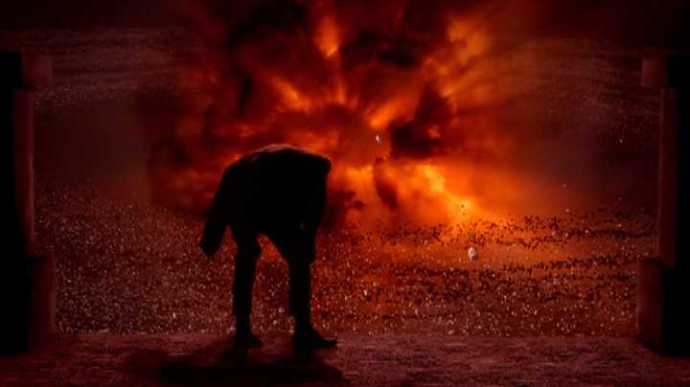 And there’s another thing. Who remembers this?

Don’t watch the whole thing, it’s car-crash TV. Just skip to the two minute mark and that little scene with Gwen. You see what I mean.

Of course, it’s Clara who saves the day, because the god feeds on things of value, and Clara has the leaf that brought her parents together – the cryptic ‘first page’ from last week’s installment  Her argument is that the leaf represents potential, as in days unlived, and that this ought to be enough to satisfy any god. This makes about as much sense as Sir Bedevere’s assertion that witches burn because they’re made of wood, but since when did religious fundamentalism have anything to do with common sense?

Too much staring as well. But she has a certain charm.

Oh, look, the whole thing was a mess. I know that. But it was a joyous mess. Smith and Coleman bounce off each other with flair, and it’s nice to see the Doctor actually enjoying himself again after the heavy brow that beset him in 2012. Coleman herself is including far too many ‘meaningful’ looks in her repertoire, but she’s not yet slipped into the irritating phase – something that I fear will happen the more we discover about her, as we did with River Song, but as an enigma she has a certain charm. Farren Blackburn directs with competence; Cross’s script is also competent, if melodramatic and occasionally silly (I could really have done without the dog barking), and thematically the thing hangs together pretty well, to the extent that I’m prepared to forgive some of its structural flaws and eyebrow-raising moments. In Clara, the Doctor has found a reason to travel again – and I, in turn, may have found a reason to watch.

10 thoughts on “Review: ‘The Rings of Akhaten’”