You’ll recall that yesterday I posted an image of all eleven Doctors in crochet form, along with a suitably knitting-themed Who-related title from a serial that I have yet to see (although I’m now told it features Martin Jarvis as the King of the Bumblebee people, so it’ll have to go on the watch list).

The source article for this photo contained “speculation” from a bloke calling himself Luke Smith who said that Doctor Who would be ‘rested’ after the fiftieth anniversary. “The BBC are getting tired of it”, he said (I’m paraphrasing and correcting his atrocious spelling and non-existent grammer; the original comments are probably still on there if you’re quick) “and they want to spend their money on other things”.

Mr Smith’s source for this nugget of information? A “mate” of his at Big Finish. When confronted with the accusation that BF aren’t in a position to actually know anything like this for certain, he backtracked and admitted that it was “a rumour”, which led to further ridicule. (He also didn’t help himself by asking why his previous remarks had been deleted, when in fact they had just been moved to the “further comments” bit.)

So he didn’t present his case very well, but it may well turn out to be true. Why shouldn’t it be canned? It’s going to happen sooner or later, and perhaps it should go out on a high, or at least have a break from Moffat’s relentless signposting, false leads and emotional companion-centred angst. Anyway, the funny thing is that if they were to do this it might actually do the show some good. For one thing, as Gareth pointed out, Big Finish would probably get some sort of temporary license to produce Ninth / Tenth / Eleventh Doctor material, which could be fun, particularly as the only way you’re ever going to get Christopher “Never bathe in the same river twice” Eccleston back into that TARDIS is if he can be standing in front of a studio microphone rather than a big flashy column and a doe-eyed Billie Piper. (I will probably be proved spectacularly wrong now, a theme to which we will return at a later date.)

The problem with having Eccleston on board, of course, is that he only ever travelled with Rose – she was with him until the end, and the only times she’s not at his side are during the temporary separations they experience in ‘Father’s Day’ and ‘Parting of the Ways’, when the Doctor’s preoccupied with other things. Indeed, the whole concept of Rose staying with the Doctor is a vital plot point to the season, as her frequent absences are a cause of friction with her family, and it’s not until Tennant’s put on his brown suit for the first time that this is properly resolved. More to the point, when we first meet the Doctor in ‘Rose’, he takes the earliest opportunity to glance at himself in a mirror, remarking on his physical appearance with “Could have been worse. Look at the ears!”. 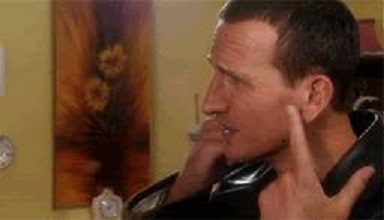 But just a moment. That’s ambiguous. It’s ambiguous in a way that Smith’s comment in ‘The Eleventh Hour’ – when he refers to Prisoner Zero’s emulation of him as “rubbish; who’s that supposed to be?” – is not. The Eleventh Doctor admits that he doesn’t know what he looks like as he’s not yet seen a mirror, but we don’t know for sure that the Ninth Doctor is experiencing anything of the sort. It’s assumed that he’s only just regenerated – and indeed, Davies seems to have inserted this line precisely in order to avoid the flood of fan fiction that would otherwise saturate the internet, in which the Ninth Doctor travels with Victoria / Adric / Mel, but this territory-marking isn’t exactly airtight, the way that J.K. Rowling’s was.

“This could easily be explained,” Gareth said, “by his recently having had a haircut – after all, the Eighth Doctor had longish hair, so maybe the Ninth did for a while. Clearly he finds the new haircut awful, and is thinking how much worse his appearance would be if he didn’t have impressive ears. So he’s thinking, ‘Phew! Thank goodness I have fantastic ears!’ Or maybe he’d just come from an adventure with a race of earless people, and he was just checking.”

Which makes so much sense I am now convinced it was the truth. And it opens up a whole new world of possibilities. Eccleston visiting the Sioux and acquiring the name ‘Grins Like An Idiot’. Travelling to America, having an adventure with Michael Knight (“Fine, it talks to you, but can it travel in time?”) and getting a leather jacket as a souvenir. Popping in on a family he once knew in Manchester and getting mistaken for the Messiah. (It would certainly explain the Tenth Doctor’s God complex.)

The only problem, of course, is that a long-haired Ninth Doctor looks like this. 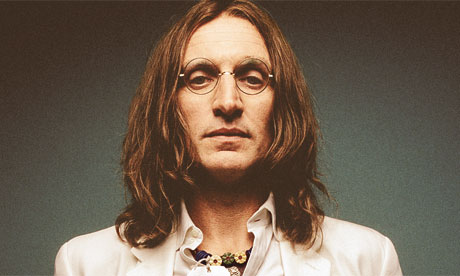