The Blue Box of Delights, and other matters

Having reached the series six mid-point, we are having a temporary hiatus from Doctor Who, at least until after Christmas. It is causing over-anxiety and possibly nightmares and I am, in any case, bloody sick of River Song. We will reconvene in the New Year, after the decorations come down. It can wait until then.

To fill in the time, and to get everyone in a seasonal mood, Joshua and Daniel and I have spent the last week watching The Box of Delights, the 1984 adaptation of John Masefield’s classic. It’s aged quite well for a BBC fantasy drama production – some of the effects are ropey, but the chrome painted effects still hold up, and it features a despicable villain and any number of memorable sequences (even if the ending features an unforgivable literary conceit). Still, the thought occurred – about halfway through the week – that in order to escape from Who we’re watching a BBC family adventure serial starring Patrick Troughton as a mysterious, wild-eyed eccentric who claims to have either travelled in time or lived for hundreds of years (or both), and who is seldom without a mystical sentient box that appears to be bigger on the inside. The irony of this is not lost on me.

Yesterday afternoon, Emily got out the gingerbread house kit that we never got round to assembling last year, and built it, with a little help from two of the boys. Here it is. 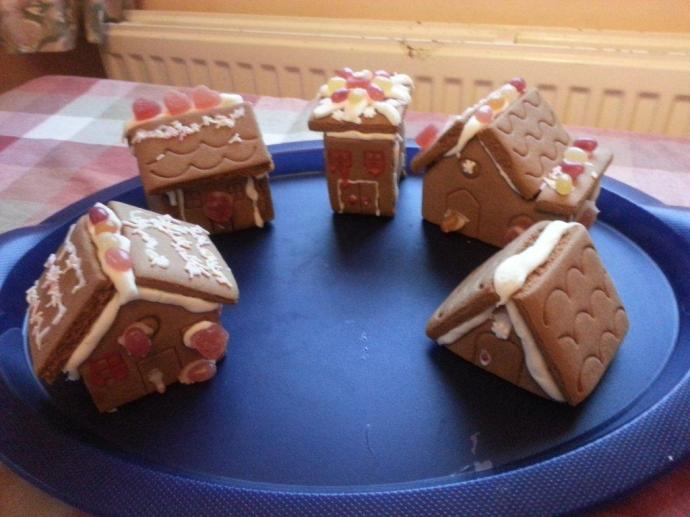 When I posted this on Facebook, a few people pointed out how out of character it was that I hadn’t covered the scene with Doctor Who characters. Conscious of time this morning, but not wanting to let them down, I obliged.

Amy’s new fancy dress costume was the bee’s knees, but it wasn’t without its problems.

“Why did no one tell us we looked like David Cameron?”

Yes, of course I’m procrastinating. You would too, in a study this untidy.

2 thoughts on “The Blue Box of Delights, and other matters”