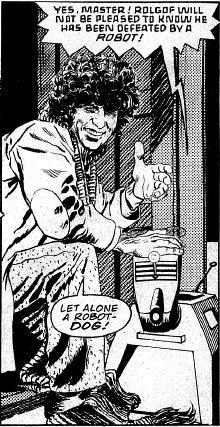 I will, at some point, be talking about ‘The Invisible Enemy’, and all its sub-par Fantastic Voyage / Prisoner rip-off silliness. But before I finish the photo manipulation I wanted to mention K-9. Largely because it’s the first time we’ve seen him in the classic run, and already I hate him. He clatters around the medical facility annoying everyone with his high-pitched voice and crapping little ball bearings all over the place. The concept of stealth, or indeed quietness in general, does not exist for him. In the midst of this story I remembered I once had a K-9 ice lolly back in the early 1980s – it was orange flavour, and almost as imposing and unpleasant on the palate as Leeson’s insufferable tin dog was on the rest of my senses the other evening.

I mentioned this sense of irritation to Gareth, who sent a note of reassurance, and after that our conversation (somewhat restructured and slightly edited) went more or less like this…

Gareth: K-9 gets better when he’s used more sparingly. He’s also better the following season when he gets a quieter motor.

Me: Yes, although I gather that he then became something of a get-out clause, which is why they ultimately wrote him out. He’d become what the sonic screwdriver eventually became.

(My father refuses to read Lord of the Rings, despite my best efforts. He enjoyed The Hobbit, but basically has a problem with fantasy as a concept. It’s not so much the other world aspect as the use of magic, as he puts it, as a quick fix for any insurmountable problem – i.e. if they’re stuck in a dangerous situation they can use a spell to escape. I grant that this is almost certainly the case for a number of instances of bad writing, but I’ve never really found it a problem in Tolkien (apart from bits of The Hobbit). Nothing I say will convince him otherwise!)

Gareth: This is never a problem in LotR! Now if you’d talked about the Eagles…

Me: I know! I should get on at him again. I can sort of forgive the Eagles at the end of LoTR because ultimately it’s the destruction of the ring that turns the tide of the Black Gate battle. But he uses the same trick twice, and it feels a bit cheap.

Gareth: Twice in LotR, and once in The Hobbit! And yet the answer to “why don’t the Eagles just fly the Ring to Mount Doom in the first place?” isn’t in the book. Silly!

Me: Tolkien called them “a dangerous machine”. Practically there would have been difficulties. They’d have been seen, and the Nine would have attacked with their big dragon-type beasts – this would have been known from the start. It would have been a suicide run. Because of this, and also because of the fact that the eagles are simply quite lofty creatures, they’d probably have refused.

Gareth: I know the reasons! They’re also the servants of Manwe, and Manwe would probably regard such matters as trifling internal affairs of Middle-Earth.

But all you needed for this was a paragraph of explanation, in which Gandalf says “Yes, we thought about doing an airdrop, but Gwaihir really doesn’t want to, and anyway I used up all my favours at the Battle of Five Armies”. And then another paragraph at the siege of Minas Tirith in which Gandalf sends a scout (“A scout!”*) to the eagles to ask for help, and then we don’t hear anything else until the end of the book, when they arrive to assist at the Black Gate. That would have been just about plausible: the idea that they had to be convinced, just as the Ents did in the film (and yes, I know that’s wrong, but it works as a dramatic device).

Gareth: Indeed. Something in the Council Of Elrond would have done. “We tried getting Eagles to carry the Ring, but the pesky birds turned invisible. And since Eagles navigate by tracking their shadows on the ground, the stupid things kept crashing into trees. One even got wedged in an Ent’s ear. His ear!”

Me: Couldn’t they have got the elves to take it with them to the undying lands, and then drop it in the ocean on the way? That’s a pretty sure way of losing it for a couple of millennia. Or, you know, they could have stuck it on the top of the shelf where I keep my CD markers. Then it’s guaranteed that no one will ever see it again.

Gareth: But it would still exist, and Sauron was growing powerful already. The Ring needed to be destroyed to break his power.

Me: I am going to blog this, by the way.

Gareth: Really? Is it worth it? We haven’t said anything that hasn’t been said hundreds of times before.

Me: Yes, but that’s what the internet is *for*.

Really it’s about how our Who discussions take us in all sorts of weird directions.

Gareth: It wasn’t that weird!

Me: What we really need now is some sort of random LOTR connection back to Who. 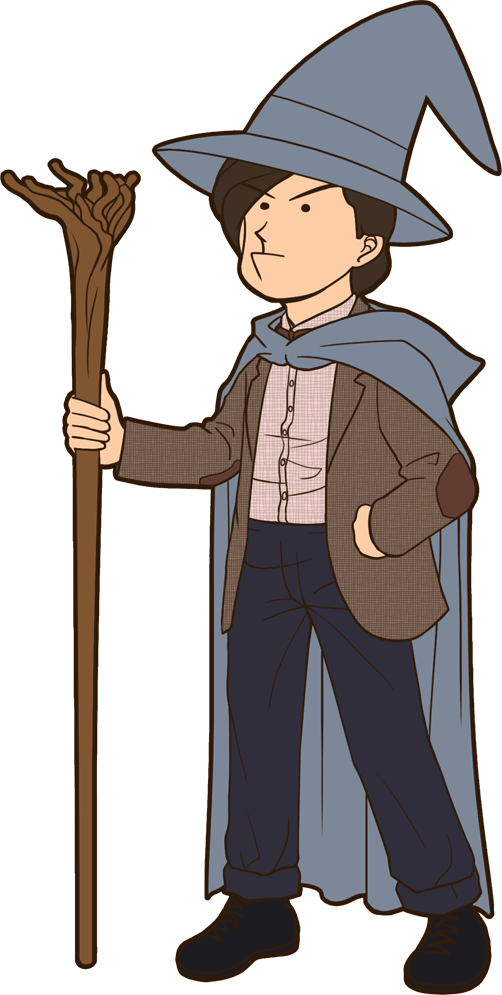