The Great Doctor Who Party (i)

I will post food pictures tomorrow; I’m still optimising them. Suffice to say it was a success: thirteen children running riot round an Oxfordshire bungalow. One of the visiting sprogs has a two-tier volume setting: window-shattering and avalanche-inducing. My ears bled, but it was fun. I am paying the price for the late nights – plus my body appeared to have been holding out against the sickness bug doing the rounds in our family until the last child had gone home, at which point I was ready to collapse.

Anyway, despite things going swimmingly we were rather disappointed that the puzzle sheets I spent ages preparing went somewhat under the radar:

(The 910-year-old thing is a source of contention, of course, given that the Doctor says his current age is 1103 – more of that below – but it was a catchy title.)

I’d sourced a mixture of online materials and scanned magazine pieces (even going so far as to rewrite half the word search when Gareth pointed out that the author had misspelled Gallifrey), but no one did them – they were having too much fun with the Slitheen! Likewise the colouring pages – there were 72 of them, and by the end of the party there were 71, Daniel having decided to turn a Cyberman bright orange and pink, which improved it immeasurably. Considerably more successful were the laminated cards I prepped, having figured out that while a considerable number of generally culture-aware children were coming to our house to attend a Doctor Who party, their own knowledge of the show – based on what I hear in the playground – is somewhat limited. (Joshua knows all about it, of course, but he’s the son of two self-confessed geeks. He never really stood a chance.)

So I typed up a series of flash cards (all right, they’re not exactly flash cards, given that you have to stop and read them, but you get the point) and sat in front of a laminator the other evening, and this was the result. 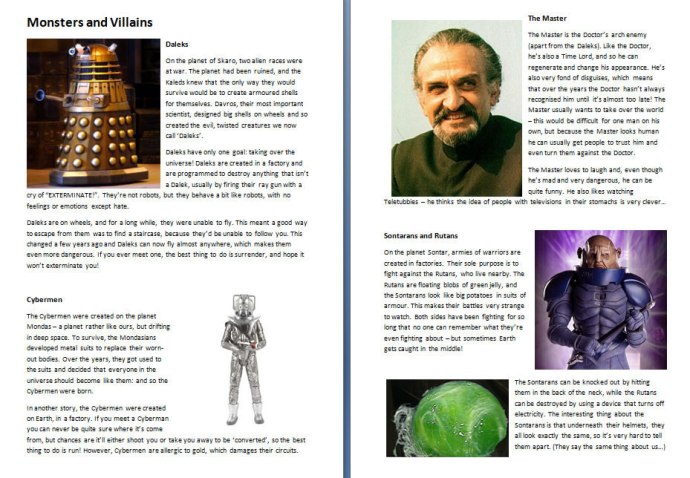 (I would never be so bold as to presume you would, but if anyone wants the source material for this lot, get in touch with me and we can talk about it.)

I make no apology for the occasional factual error or inconsistency or ambiguity (the Doctor’s age, for example, which is such a source of debate that it’s not worth arguing about – you might as well pluck a figure out of the air, or at least make an educated guess) – I did the thing in a hurry. Gareth was invaluable in clearing up some of it but any mistakes in there are mine. Besides, the intended audience was seven. They’re not going to question, or at least if they do and you turn out to be wrong they won’t leave three paragraphs of inflammatory abuse on your blog.

Then we stuck them in here.

The party bag designs were Emily’s idea. I knew all those old issues of Doctor Who Adventures would come in useful…

4 thoughts on “The Great Doctor Who Party (i)”