There are many, many reasons why I love my wife. The one I’m going to talk about tonight is her ability to spot a bargain. We live about ten minutes’ walk from the town centre (our immediate neighbours are a funeral director and a curry house, which I’ve always found slightly bizarre) and she’ll often stroll down the high street with Daniel after the school run. The town in which we live is peppered with charity shops, of varying degrees of interest and friendliness: the ones I like seem to be constantly closed, while our nearest Shaw Trust will say it’s open until five and then lock the doors at quarter to so they can vacuum. Conversely the nearby Cancer Research is open until half past and sometimes beyond. The chap who used to be in Action For Children on a Saturday looked and behaved like a nightclub bouncer, but the elderly ladies in Oxfam are a delight.I am in these places quite a lot, because the joy behind charity shops – besides picking up the odd slightly guilty bargain when you get something that you know should have been priced higher, because you know it’s more valuable than the person who priced it thought it was – is that you never know what you’re going to find in there. The contents of the shelves morph and shift on a daily basis as stock comes in and out. I can see piles of cluttered donations in the back rooms whenever I’m in there, as two or three middle-aged W.I. stalwarts go through the boxes and bags of mugs and books and old clothes, occasionally nipping out to the front to serve the person who’s buying a barely-thumbed copy of The Lost Symbol and a freezer bag full of Lego. Sometimes things stay out on the racks for weeks: Peculiar Adventures of Hector DVDs (God there are a lot of those), Spice Girl albums and Michael Palin books are the chief offenders, although you would be amazed at how many copies of Dina Carroll’s So Close I’ve found on the shelves next to whatever X-Factor runner-up has been dumped there recently.

My charity shop browsing usually involves a look round the toy racks, a quick examination of the trinkets shelves in search of kitsch mugs (it’s a long story, and you would find it dull) and a look through whatever CDs / DVDs / games they have that I’d not spotted weeks before. I am always on the lookout for Doctor Who items, but they usually manifest in the form of those tedious Tenth Doctor novels (typically the ones with Martha, which were a low point) or jigsaws that I won’t do and that Joshua has no patience for, or the DVDs I happen to own anyway. I’d love to come across a few of the Classic Who two-disc sets, or perhaps a vintage annual, but the people who own such things have, I suspect, sensibly realised that these items are worth a few bob and that they’d be much better off trying to shift them on Ebay or Amazon.

Then one day, a couple of weeks ago, Emily found the figures.

There were a lot. A box of Daleks and Cybermen sat by the shop door, and a whole load more festooned the shelves. Such items are never there for long, because other people grab them quickly, so my wife got in quick. At this point she was very sensible and bought only the ones that she thought we’d really want. Then she brought them back and showed them to me. 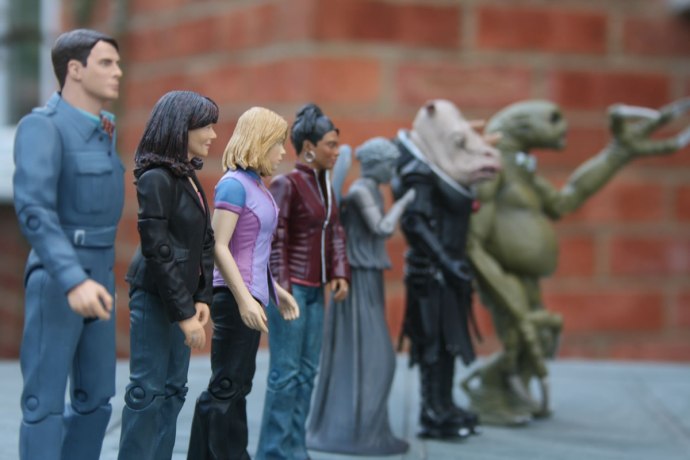 This is the first lot.

And I asked her if there were any more, and she cocked her head and then said “Yes…oh, I suppose it’s for a good cause”, which is the nearest you get to actual permission to go out and spend half your month’s paycheque on a bunch of (very reasonably priced) plastic.

So anyway, on my way back to work… 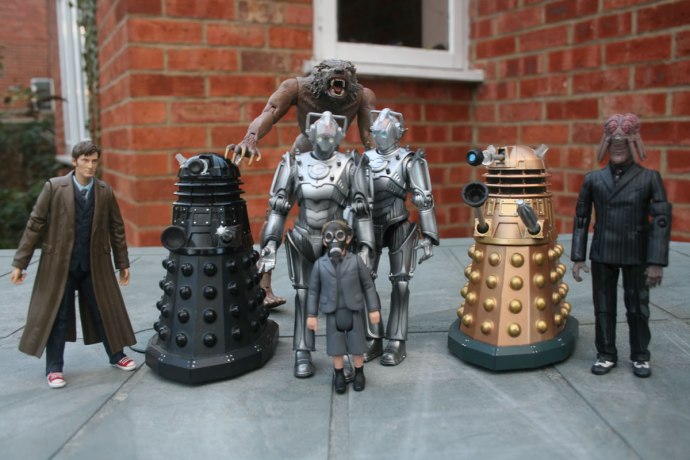 The second batch. (If this looks like a rather creepy wedding photo, that was deliberate.)

By the time I got round to photographing this lot (before the boys got to play with them and the inevitable scratches and breakages started happening) an impromptu convention was in the works, on the plastic dining table out on the patio. 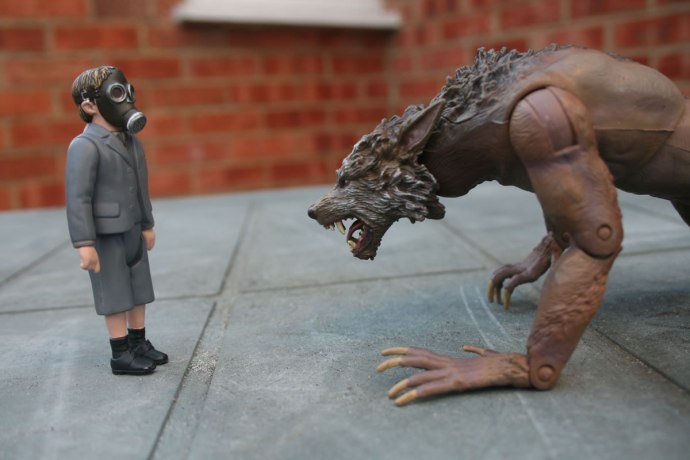 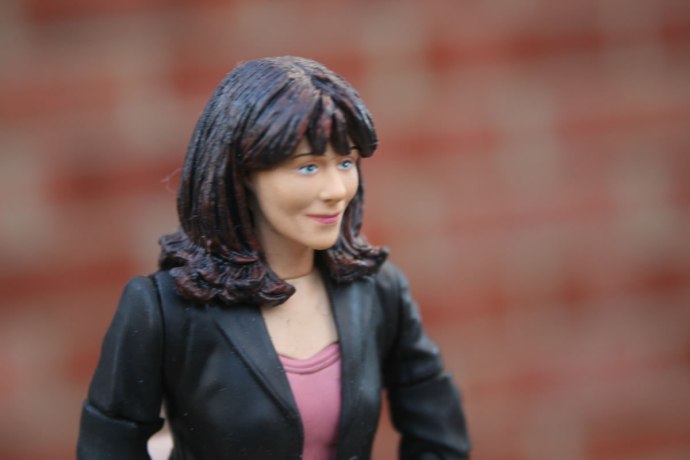 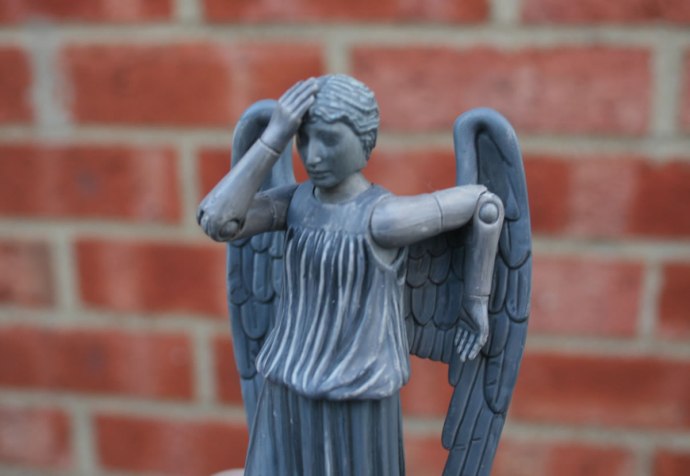 By this time I was on a roll. 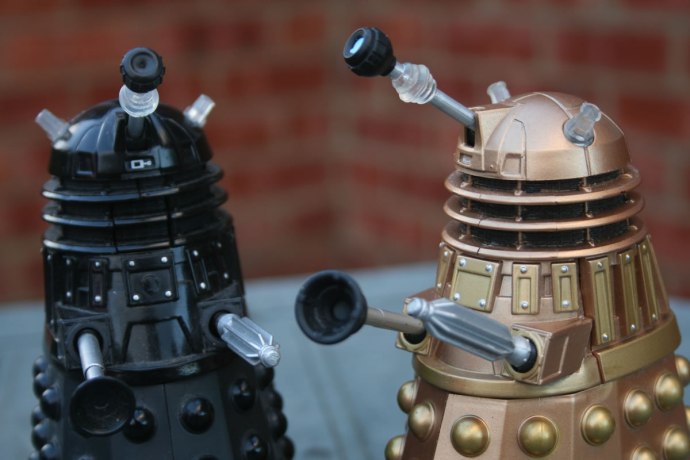 “Yeah, I’m down to do the shipping forecast next Sunday.” 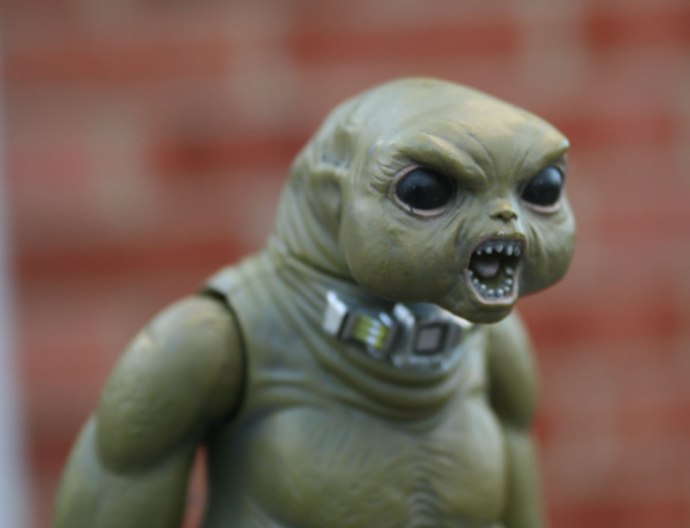 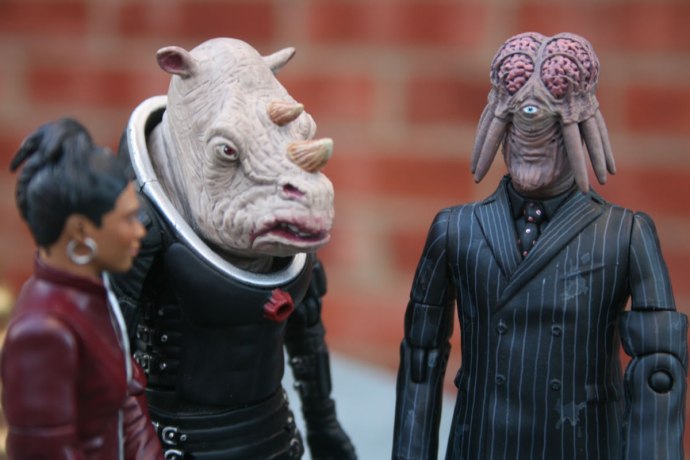 “All right, ‘Evolution of the Daleks’ was shit. But did you see ‘Waters of Mars’?”

It was, at this point, essential to get a group shot before this lot got completely out of control. So I grabbed the stuff we already owned and put it all together. Note the positioning of the couples. 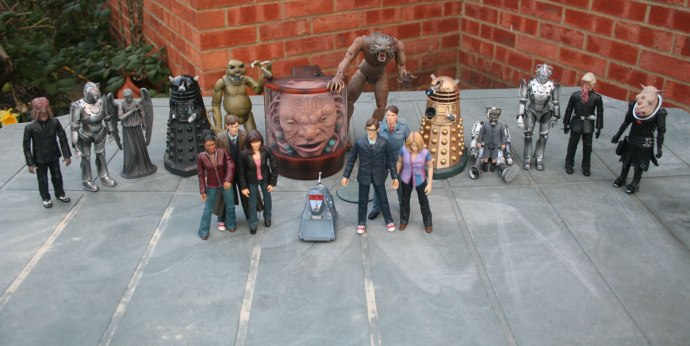 The whole gang, minus the Sycorax, who was out of the office, and it was too much of a faff to set it all up again.

Unfortunately, the table is flimsy and wobbly, and five seconds after I snapped the above, this happened. 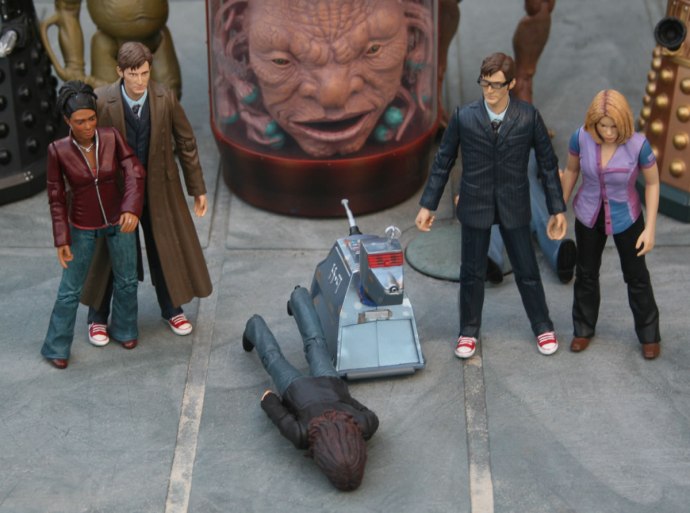 I was mortified, and called proceedings to a swift halt. Fun while it lasted, anyway.