The Brain of Morbius

My other half and I tend to watch these stories together. Emily’s never quite shared my passion for Doctor Who but she has always endured it willingly and without complaint and usually enjoys what she sees (and, when she doesn’t, always finds some way to elegantly take the piss out of it). She’s therefore a necessary ingredient to any Who story I’m experiencing for the first time; it keeps me from pitching over the edge of the fanboy abyss into unequivocal adulation.

My friend Gareth refers to this one as ‘Solon, and thanks for all the flesh’, which is both pithy and accurate. There’s the usual structure – layered antagonists, with henchman-works-for-boss-who-is-assisting-incapacitated-mastermind – and the Doctor and his companion held prisoner on suspicion of murder (in this case, before the fact). ‘The Brain of Morbius’ doesn’t pretend to be anything other than Frankenstein in space, and it doesn’t suffer for it. We have:

‘The Brain of Morbius’ opens with a mysterious death on an alien planet. The TARDIS materialises nearby, the Doctor berating the Time Lords for, apparently, pulling them off course. This ambiguity is curiously unresolved come the end of the story: we are led to believe that the Sisterhood of Karn has pulled in passing ships to protect the elixir, but engaging the Doctor in a covert operation to depose the nearly-resurrected Morbius is exactly the sort of thing that the Time Lords would get him to do, and we still don’t know for certain that they didn’t.

It was Emily who suggested that the Sisterhood resembled a futuristic W.I. This theory was vindicated when Maren (or Ohica) remarked “nothing changes!”. They’re perhaps a little more hostile than the cast of Calendar Girls but there are definite parallels. “And it would explain,” said Emily, “why she’s wearing a cake on her head.”

Over in the aforementioned Gothic castle, pioneering surgeon Solon is trying to stitch together a new body for Morbius, a renegade Time Lord now reduced to a brain-in-a-jar cliché. Solon’s played by Philip Madoc, a recurring Doctor Who actor but one whom I knew primarily for his turn as the U-boat captain in Dad’s Army. Solon epitomises the nasty genius – cruel, devious, manipulative and self-obsessed, while Condo is the obedient sidekick, who you know will eventually try and do the right thing and come to a bad end. 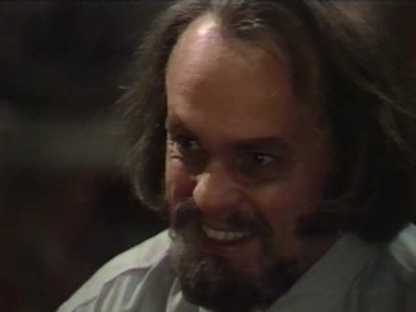 Solon. Would you trust this man?

While Solon and Condo are trying to create life, the Sisterhood have summoned the TARDIS, and are about to kill the Doctor. There’s a bit more writhing around and hissing, and some interpretative dance. Nonetheless, the WI parallels are still prominent. 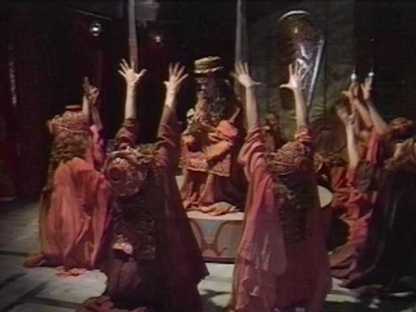 “You watch,” says Emily as they tie the Doctor to a post. “In a minute they’ll sing ‘Jerusalem’.”
“Probably. ‘Bring me my spear! O, clouds unfold / Bring me my chariot of SA…CRED…FIRE….’”

The Doctor is rescued, thanks to the intervention of Sarah Jane, who has sneaked in wearing a disguise that frankly wouldn’t fool a six-year-old. Luckily the Sisterhood, who are completely wrapped up in their sacrificial ritual, don’t appear to notice.

Spot the odd one out.

The pair escape, but Sarah Jane’s apparently lost her sight. Fortunately this is only temporary, because I don’t think I could stomach much more of Elizabeth Sladen stumbling around the castle like PJ in Byker Grove. And we’re just in time, the operation to jump-start Morbius’ body has, it seems, been a success.

Hell of a time to get your sight back.

The story concludes with a battle of minds between Doctor and Morbius, which is sadly more famous for its controversial continuity than it is for the Time Lord wrestling itself: we see images of the first three Doctors and then a further eight (played by the crew), which I always took to be Morbius’ previous regenerations. There’s a lot of online speculation about whether Hartnell’s Doctor is in fact the first, or whether it ties in with the ‘Lungbarrow’ continuity of the Doctor being the Other, but ultimately all the fuss gets you nowhere. There’s no way to be sure, there’s no certainty about how many regenerations a Time Lord has anyway, and those who labour this point would do well to remember that over the years, Doctor Who has always contradicted itself.

One of the Morbius Doctors. Whose identity is ambiguous. AND I REALLY COULDN’T GIVE A SHIT.

Despite such notoriety, ‘Morbius’ is a cracking adventure, and the horror theme follows neatly on from the Jekyll and Hyde slant taken by ‘Planet of Evil’, its predecessor. Like many Who stories it’s difficult to take the supporting characters seriously, purely because there is the usual overacting and theatrical nonsense – still, this is all part of the fun. The tension is maintained nicely over the four episodes, and Baker and Sladen are as watchable as ever – there are some enjoyable fourth wall breaking moments, such as when the Doctor tells Solon that he’s owned several heads, adding “I used to have an old grey model before this. Some people liked it”. Similarly, when Baker wakes up on the floor of the lab to find a distraught Sladen grieving his apparent expiration, he’s pleased to put her right:

And you’d think that by now, she’d have learned…